Sometimes when I’m designing a menu for client, I’ll push them to try new things. At times, this is well-received, and other times, I’m meet with reticence or flat-out rejection.

Working in catering has taught me that, generally speaking, people like what they like. Food possesses a strange, unique power to comfort, often through nostalgia, tradition and that which familiarly tugs at our senses. When I was in my first year of culinary school, I remember trying to convince my family to let me revamp the Thanksgiving menu, a suggestion that was met with blank stares. The menu never changed.

I catered a client’s birthday party a couple weeks ago, my second time catering this event. Last time, they asked for seafood salad, a request I found puzzling. We live in the Midwest, not exactly a seafood hub. The first image that popped into my head was a mayo-laden emulsification of coarsely chopped mixed seafood, almost like an expensive tuna salad, reminding me of something you’d see on a buffet line next to a Jell-O mold.

Then I realized they wanted insalata di mare. The Italian version of seafood salad bears no resemblance to American tuna salad. Various seafood items are individually blanched in a highly perfumed stock, chilled, then bathed in a sharp, lemony vinaigrette and dressed in a flourish of chopped parsley, shaved fennel and thinly sliced celery. Often served around Christmastime along the coast, insalata di mare was a dish I could get behind.

In my research, I found a recipe that gave me great guidelines but worried about quantities (this is hard thing to judge when multiplying recipes for larger crowds), so I tripled everything. Individually blanched more than 7 pounds of seafood was a task unto itself and one I wasn’t eager to revisit.

The salad was a hit, but I missed the mark on quantities. I left them nearly 4 quarts of extra salad in the fridge and kicked myself for not estimating amounts properly as I drove home that night.

A few days later, I got a text from my client: Seafood salad’s gone! A hit!

It wasn’t a dish I’d choose and couldn’t imagine how an extra four quarts of it got eaten. But they were happy, so I was thrilled.

I didn’t think about seafood salad again until a few weeks ago. I was drafting a fresh menu proposal and remembered how much they liked that salad. But I wasn’t eager to revisit the prep for that dish and wanted to offer them something new, so I suggested a pasta to start and a braised chicken dish with clementines for the main, one of my favorite winter dishes.

“The chicken sounds good, but we’re more steak people,” my client wrote back. “And what about the seafood salad?”

I obliged because it’s my job is to make people what they want, but I was disappointed. I like to try new things. It’s the thing I love most about cooking; monotony only exists in the kitchen if it’s self-imposed.

That being said, one of the advantages of revisiting old hits is gaining hard-earned knowledge from previous iterations. Luckily, I took notes from my first foray into seafood salad, which helped me streamline the recipe and pare down the quantities.

On the day of the party, I served the salad first as I labored to get the rest of the dishes plated. The room went quiet as all thirteen of the guests hovered over their plates in pure rapture, communing with the experience and relishing the chance to return home to a familiar friend.

My voice sliced through the silence in the room when I asked my client what time she wanted me to finish setting up the dinner buffet. She looked up from her half-finished plate and stared at me in a daze. “I could just eat this for dinner.”

She didn’t just eat seafood salad for dinner that night, but she could of. You see, that’s the thing about the familiar; it’s familiar. Sometimes it’s best to resist the urge to ceaselessly innovate and instead return to what you already know. We like what we like.

This recipe is a labor of love. But the boon is everything can be prepped ahead of time, which makes serving a breeze. Make sure you have a large enough vessel to fit everything at the end. It’s essential to toss it all together in the same bowl prior to serving to ensure the seasoning is even and bright.

In a non-reactive stainless-steel bowl, toss the scallops with a big pinch of salt and cover with lemon juice (roughly 1 cup). Marinate for 1 hour, then strain the scallops and set aside in the fridge.

Meanwhile, heat 2 tablespoons of olive oil in an 8-quart rondeau. Sweat the onion, garlic, fennel and celery scarps over medium-low heat until softened, no color. Add the mussels, a large pinch of salt and the wine. Shake the pan vigorously and cover with a tight-fitting lid. Steam the mussels until they open, 4-6 minutes, over medium-high heat. Once opened, scoop out the mussels and transfer to a sheet tray to cool completely. Discard any mussels that don’t open.

Add 2 quarts of cold water to the mussel steaming liquid along with 3 big pinches of salt, coriander, bay leaves, black peppercorns and lemon peel. Add the squid to the poaching liquid and cook to tender, taking care not to let the water heat past a gentle simmer (170 degrees). It should take around 5 minutes, depending on the temperature of your cooking liquid. It’s cooked once it’s opaque and slightly springy to the touch. Once cooked, scoop the squid out, toss with 3 tablespoons fresh lemon juice and cool on a sheet tray.

Add another 2 big pinches of salt to the poaching liquid. Bring it up to a simmer, add the shrimp and turn off the heat. Let the shrimp cook gently until pink, 3-4 minutes. Scoop out the shrimp, toss with 3 tablespoons fresh-squeezed lemon juice and let cool.

Make the vinaigrette: Put everything minus the olive oil in a bowl and whisk well. Slowly stream in the oil and whisk. Set aside.

Once all the seafood is cool, pick the meat out of all but 15 mussels. Toss the mussels with the rest of the seafood, half the vinaigrette, and a couple large pinches of salt.  At this point, the salad can rest overnight in the fridge.

When ready to assemble the salad, toss the dressed seafood with the sliced vegetables and minced herbs (to peel celery, use a peeler to peel the ribs off the outer surface of the celery – this makes eating the celery much more pleasant). Taste and adjust the seasoning with more vinaigrette and/or salt. Serve chilled with extra vinaigrette on the side. 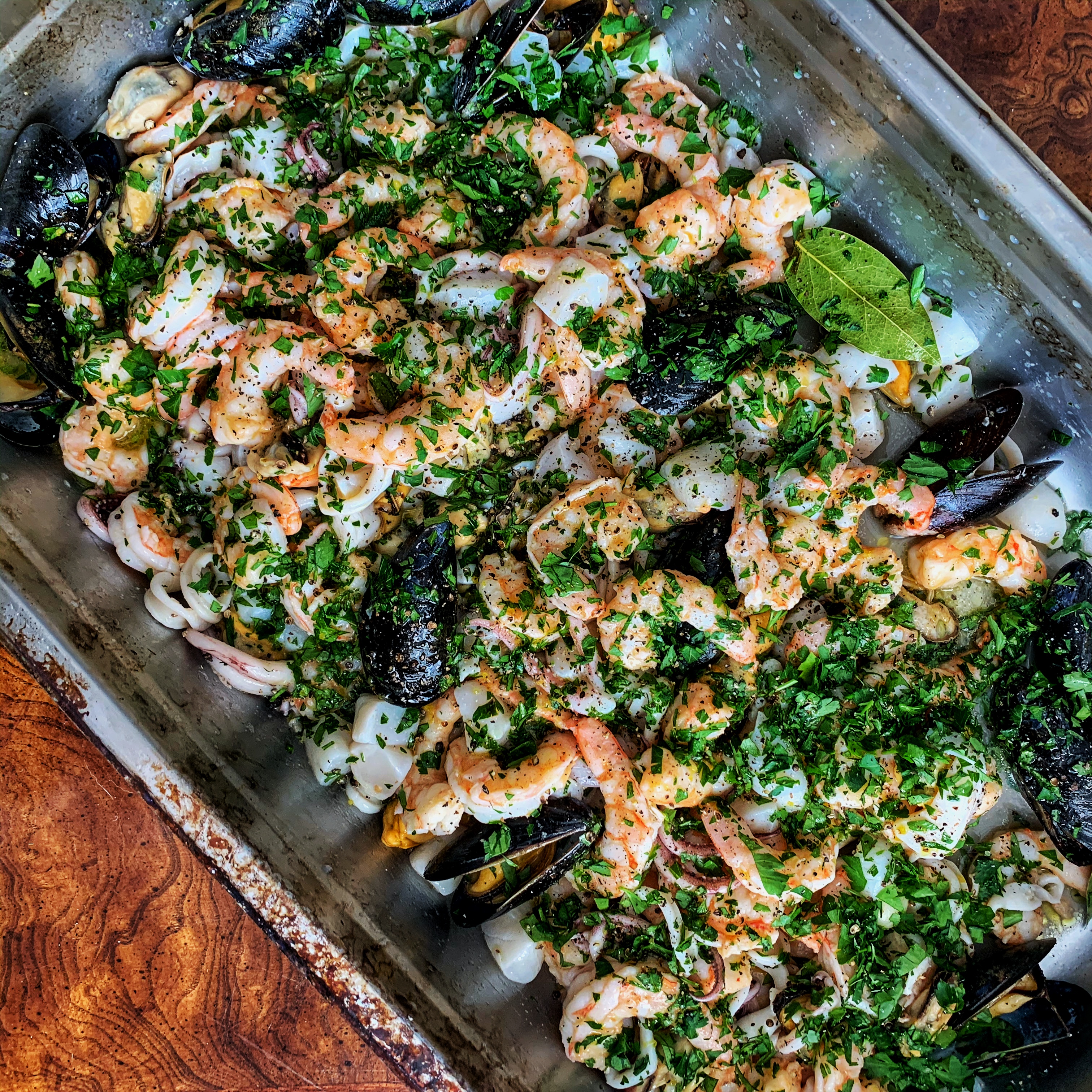