A vegan cornbread stuffing that is super flavorful and legit the best vegan Thanksgiving side dish ever! Super easy, great to make ahead and healthy too! 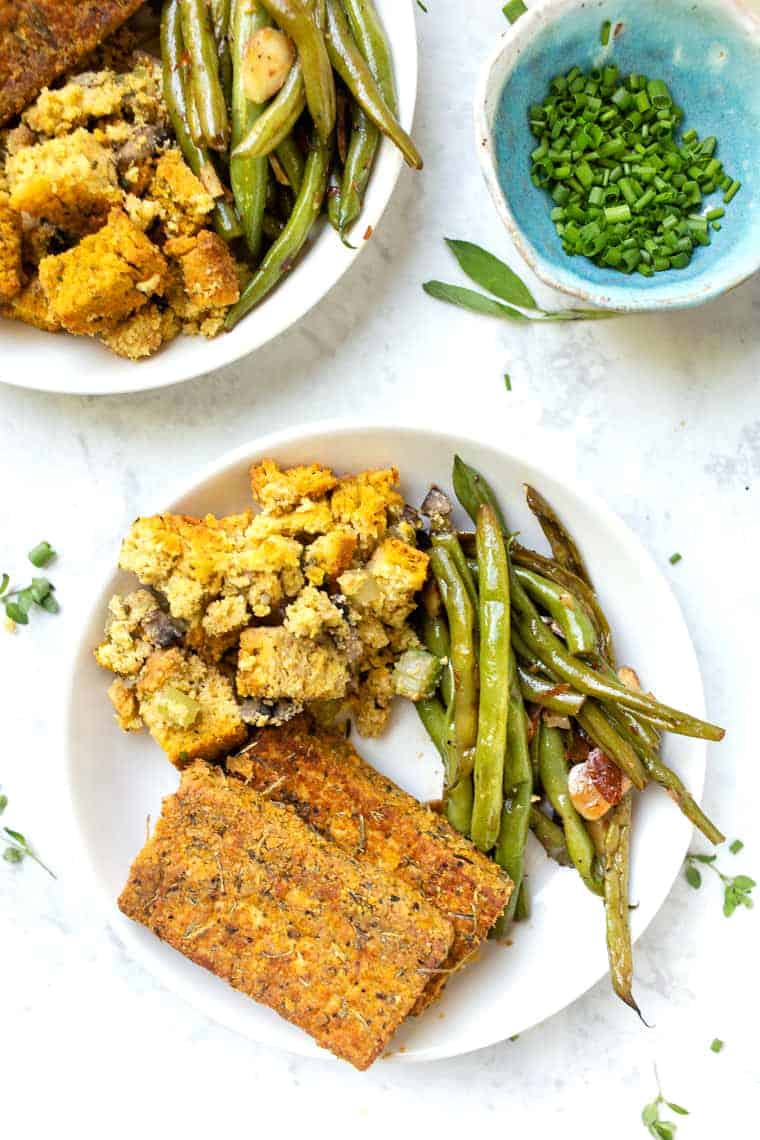 Last year for Thanksgiving I was out in Colorado with Matt's family and his sister and I cooked up a storm! She's vegetarian and we both decided that we wanted to do a primarily plant-based meal. Luckily no one else in the family is a big cook, so she and I had pretty much complete control over what was being made

We cooked a ton of the classics but also created some of our own recipes which I made sure to write down so I could recreate them for you this year. It was one of the best Thanksgiving meals I've had since eating mostly vegan and today's dish was the star of the meal!

I'm going to show you how to make the BEST vegan cornbread stuffing of your life. It's flavorful, it's healthy, it's easy to make and it's downright delicious. It's sure to be a hit at your meal whether you have plant-based eater or not! 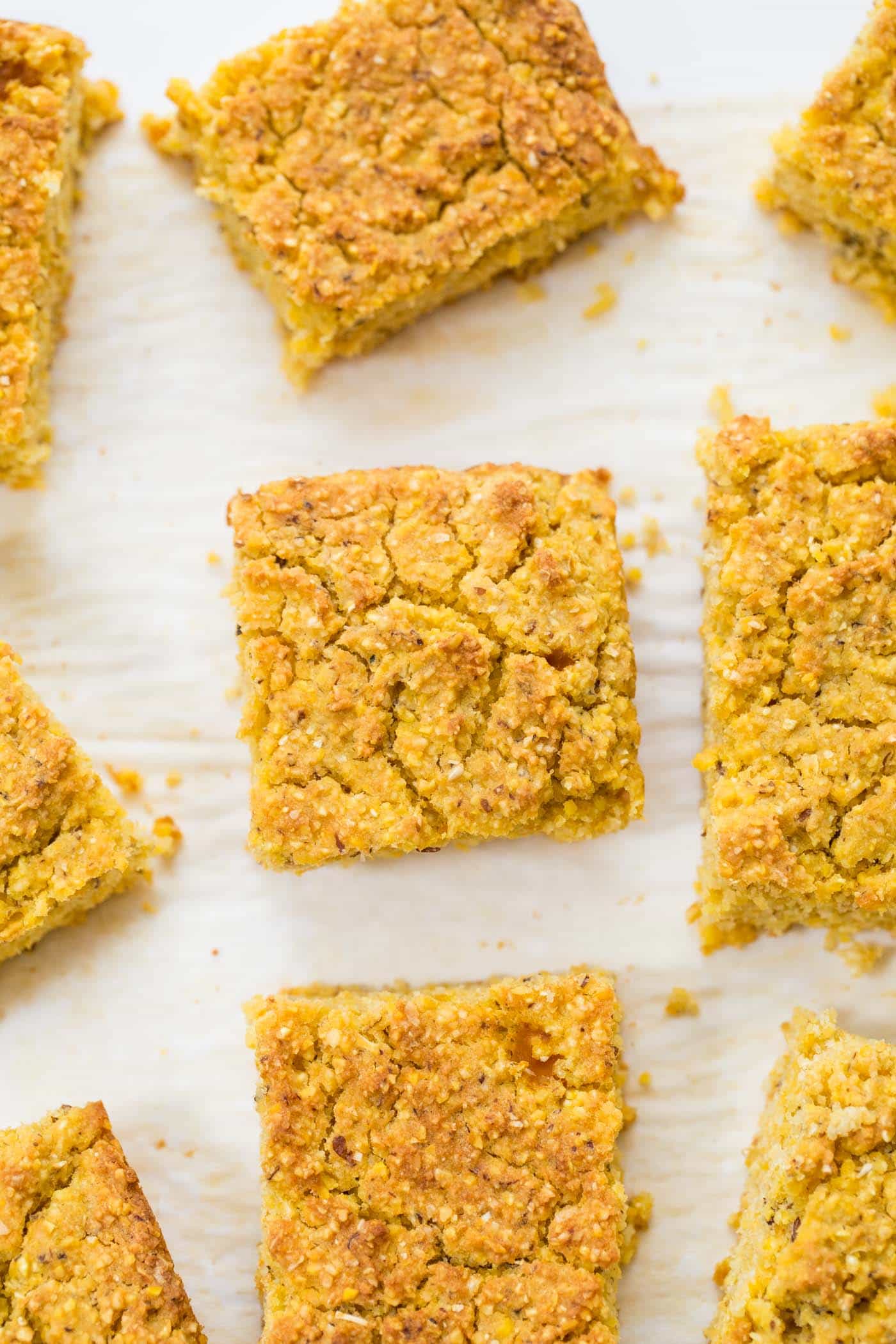 The first step to making your vegan stuffing is to make your cornbread. I'd recommend making this the day before you make your stuffing so that you can really be sure it's cooled and ready to be rebaked.

You can absolutely use whatever cornbread recipe you'd like, but I have two on the site that I think would be perfect for this stuffing. I've used both and they both work super well!

They work because they've got a little extra flavor, they're not too sweet, and they're easy to double so you could make one batch of cornbread to turn into breakfast (hello, Cornbread French Toast!), and one to make you vegan cornbread stuffing! 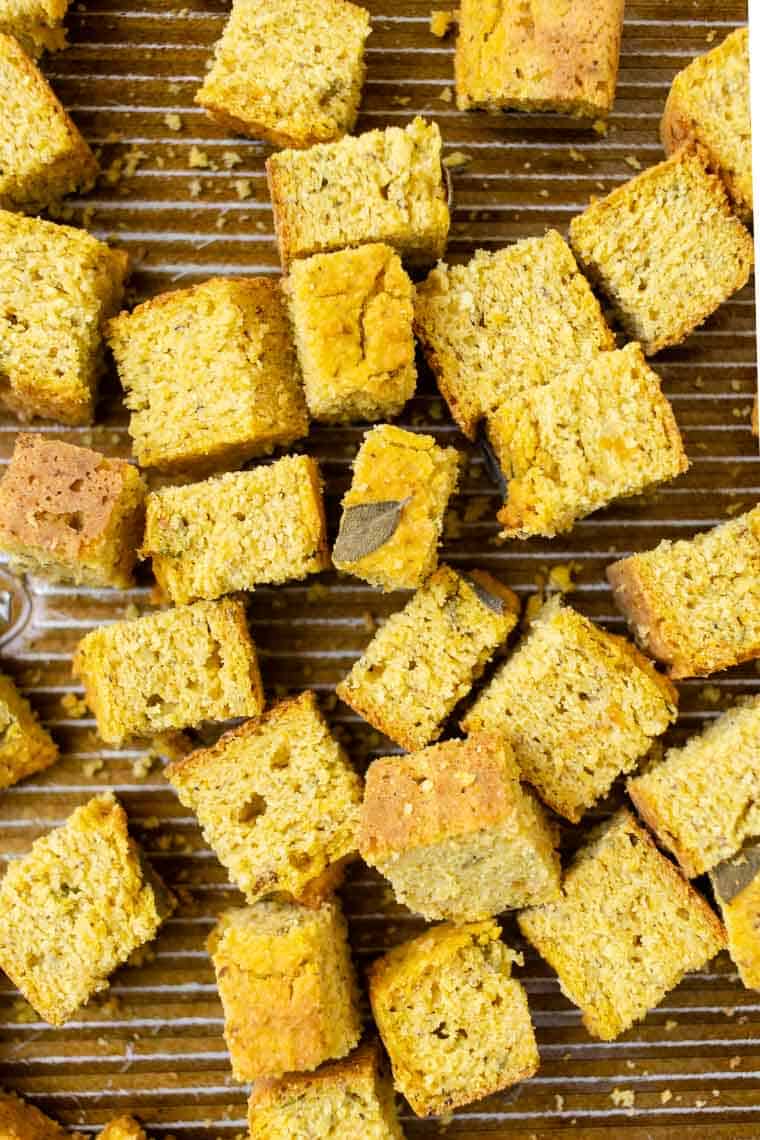 How to Make Cornbread Croutons

Once you've picked out your cornbread recipe and you've let it cool overnight, it's time to make your croutons. Traditional stuffing is made with staled cubes of bread and that's exactly what we're doing to make this stuffing too. Except this time we're going to make our own croutons.

To make cornbread croutons at home you just need to:

And that's it! They're the perfect little bites of cornbread and make the stuffing just the right texture. 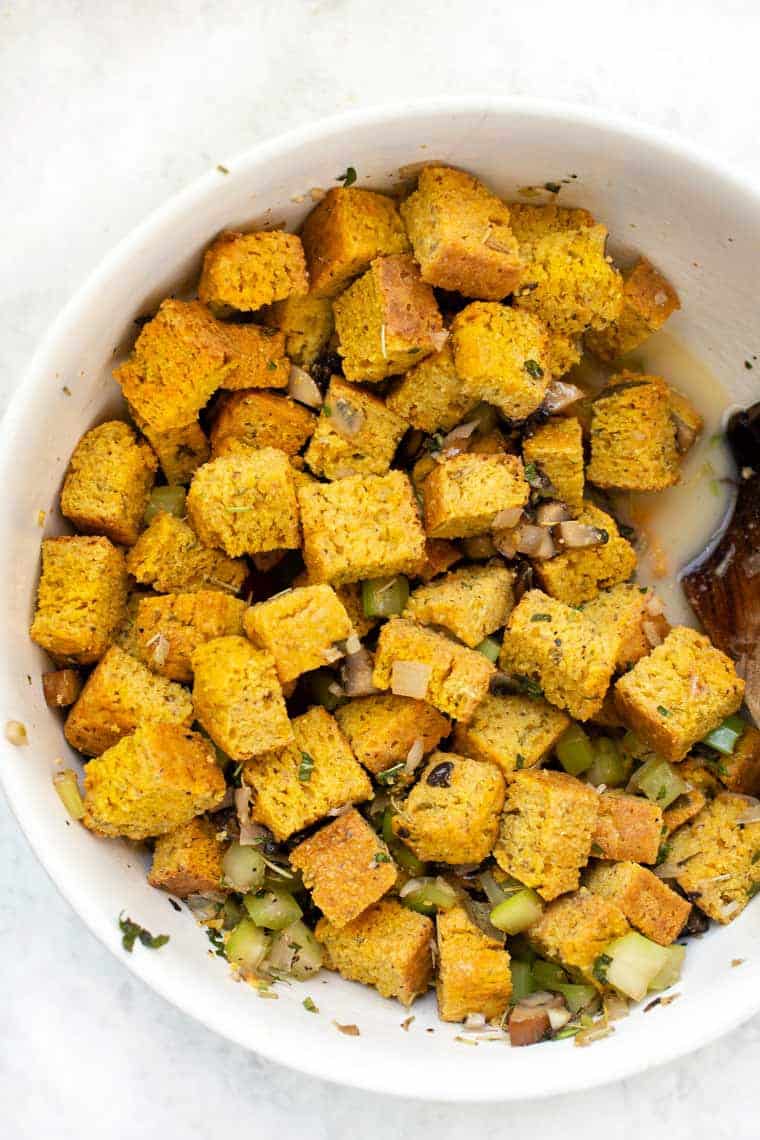 How to Make Vegan Cornbread Stuffing

Once you've got your croutons ready to go, it's time to make your stuffing! We start by sauteing some veggies together I went with celery, mushrooms, onion and garlic, as well as a TON of herbs. This is for flavor, but also for texture and it adds something a little more interesting.

Then we combine the cooked veggies with our croutons, add in some almond milk and veggie broth, stir it all together, bake it up and you're ready to go!

How to Store Cornbread Stuffing

Whether you're hosting Thanksgiving and want to get ahead or you're bringing the stuffing to the party, our vegan cornbread stuffing can totally be made ahead.

As I said earlier, you're going to need to bake in two days to make it (gotta make your cornbread first!), but otherwise, you can either:

Again, I haven't tried freezing it since I've been making this and then eating it within a day or two, but I do think it will work! 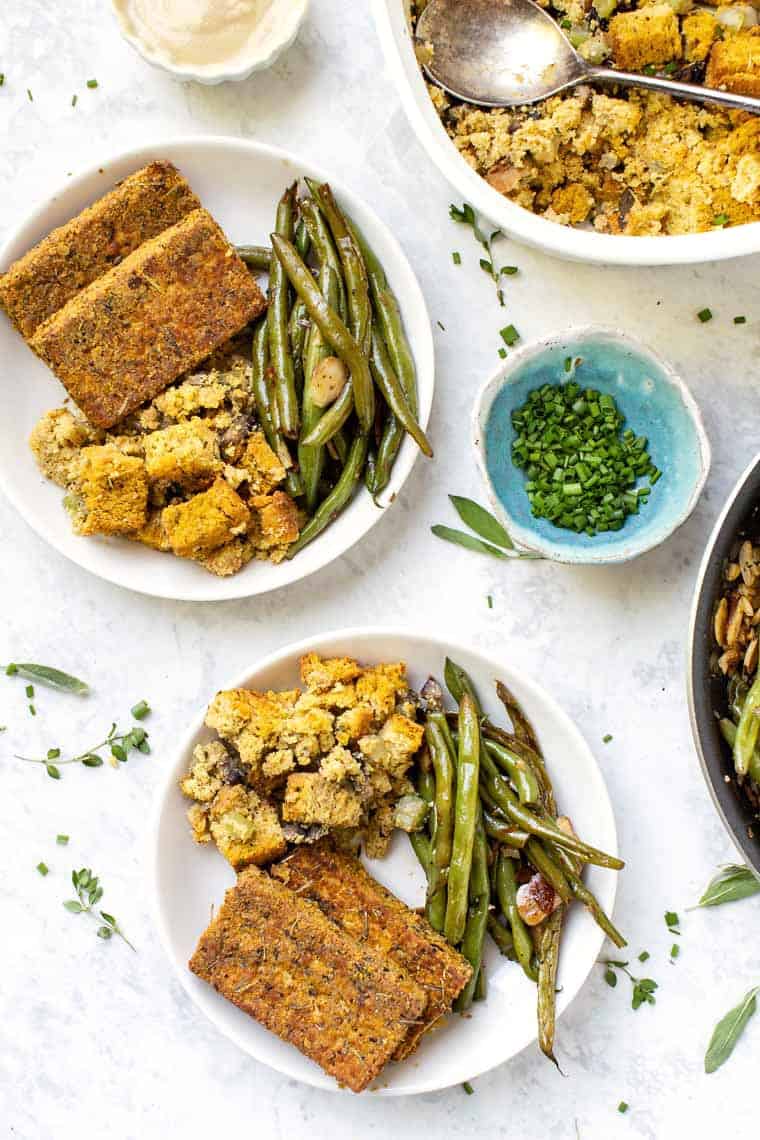 And that's pretty much all you need to know about making vegan cornbread stuffing! The last thing I want to share some tips for making Thanksgiving more vegan-friendly. I don't think my family will ever have a fully vegan Thanksgiving, but as more and more people choose to eat plant-based I do think there are ways to make it easier for them to also enjoy the meal.

Here are some ways to make Thanksgiving more vegan-friendly:

Do you have any other vegan Thanksgiving tips? I'd love to know in the comments! 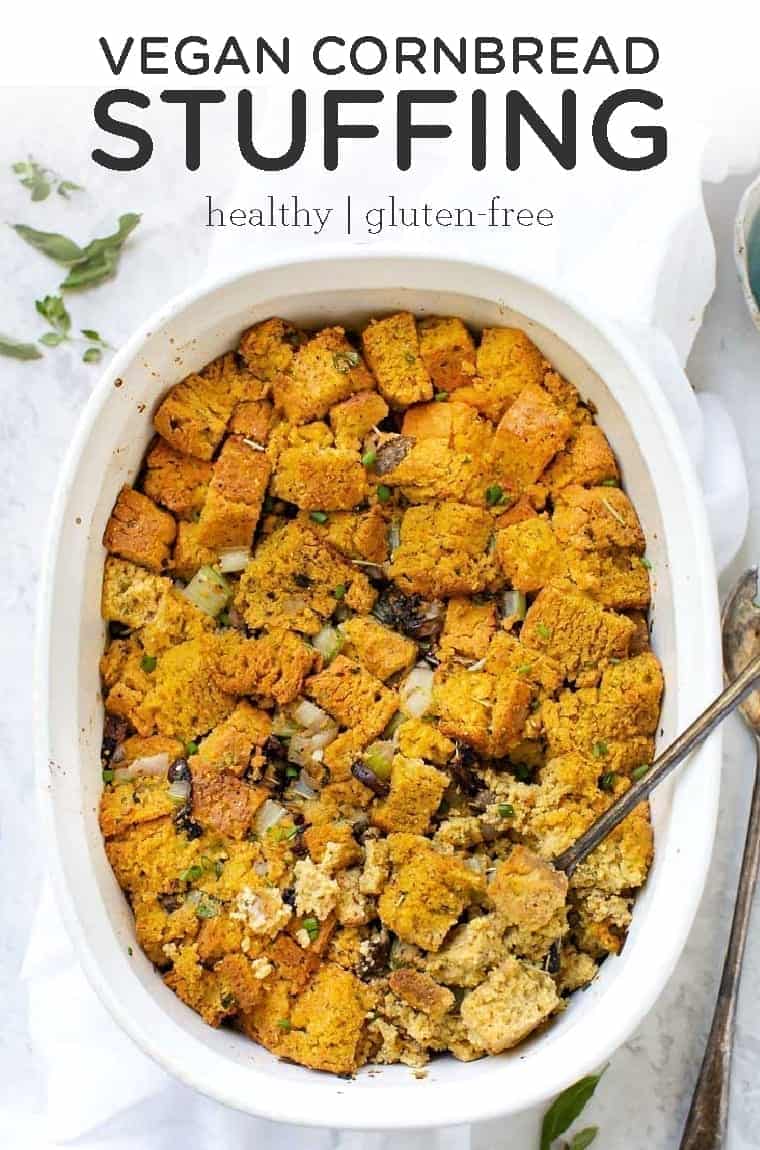 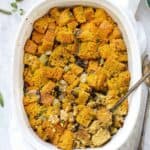 A vegan cornbread stuffing that is super flavorful and legit the best vegan Thanksgiving side dish ever! Super easy, healthy and delicious!