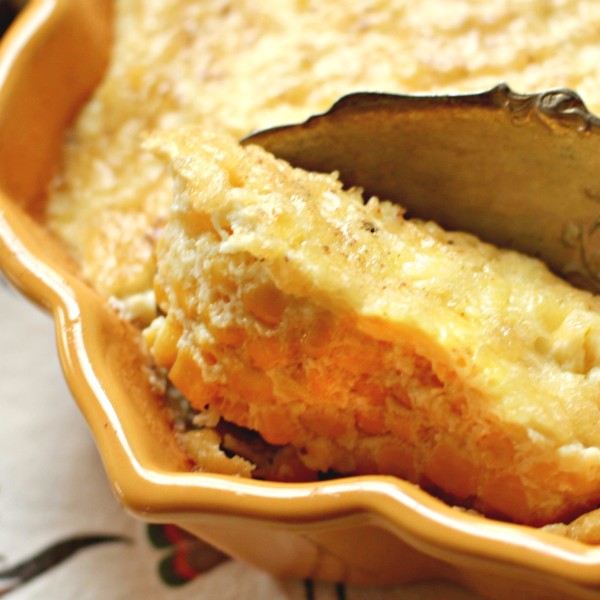 This is a long post for a simple dish, Pennslyvania Dutch Corn Pudding, and I hope you stick with it and discover a special piece of culinary Americana you may not know about.

I grew up in Amish country in a fabulous and diverse mecca of classic comfort food. Central Pennsylvania was heavily settled by the folks who were and still are referred to as the Pennsylvania Dutch.

The word dutch was a corruption of the word Deutsch or German. They came either from Germany or the German speaking part of Switzerland and not from Holland. When they arrived in America they came with recipes for sausages, sauerkraut, noodles and dumplings.

Pennsylvania introduced them to regional foods that they welcomed into their kitchens and put their own spin to. Tomatoes, pumpkins, squash and corn were heartily embraced and mastered by the Amish and the Mennonites. As food cultures collided, a new generation of comfort food was born.

The Amish and Mennonites are referred to as the plain Pennsylvania Dutch and are most associated with dishes like corn pudding and corn pie. Baked corn pudding is generally made with eggs and milk and baked like a custard. My family always added a little cinnamon and vanilla, but still maintained a savory taste using salt and pepper.

Growing up in Pennsylvania, the Pennsylvania Dutch defined American comfort food for me. Comfort food is the food we remember with a feeling of heritage, family and warmth.

The influence of their cooking in Central Pennsylvania is so strong that on certain days of the year, every household will be cooking at least one Pennsylvania Dutch dish no matter what their ethnicity. On Fat Tuesday, everyone will eat fauschnauts, (homemade donuts) and on New Years Day, every household will eat pork and sauerkraut (for good luck).

One dish that is sure to be found at every Thanksgiving table is baked corn pudding.

I cannot imagine my turkey dinner without it, nestled right up against my mashed potatoes, because I like them in the same bite.

In looking through my cookbooks, I found a signed copy of Good Earth and Country Cooking, Betty Groffs first cookbook written with Jose Wilson. Mrs. Groff was a Lancaster county culinary celebrity who ran a restaurant at Groffs Farm. Discovered by Craig Claibourne and supported by James Beard, Betty Groff made Pennsylvania Dutch farmhouse cooking famous.

Italian hospitality is rivaled only by Pennsylvania hospitality, and I was lucky enough to get the best of both worlds. Bettys first chapter in her first book is titled I Cook Because I Love People. The second chapter is titled. A food for Every Season. These two statements are close to my own heart and why I have that warm, near tearful feeling realizing how much this part of Americana developed my food view. If Betty Groff read my tag line, she would agree and probably share many stories about food and love.

This is an authentic Pennsylvania Dutch Baked Corn Pudding Recipe

I found a recipe for Bettys baked corn pudding and only slightly adapted it. By the books cover, I didnt know it was recipes from Lancaster County,and I thought she should have called it Pennsylvania Dutch Cooking. Eventually she did, when she wrote another book twenty years later, Betty Groffs Pennsylvania Dutch Cookbook. Its on Amazon and on the way, and I can hardly wait to bring more of Betty Groff back into my kitchen

I could go on and on about the memories I have from my own childhood eating this kind of food. Not all comfort food and farm cooking is equal. The Amish and the Mennonites were blessed enough to settle on rich farmland and they made more than the best out of it.

Betty talks about her family in the book and their palate. Even the men would come in the kitchen and by smell know if a dish needed salt. The standards were set very high and in this community food has to taste, smell and look delicious, although not foodie fancy, but amazing in its own rite.

There is nothing like the smell of baked corn pudding.

The corn pudding is baked in the oven and youll know when its done when it no longer shakes in the middle. I love to be the first one to dig in a with a big spoon and break the custard. Corn pudding never goes to waste and is always included in the next day left overs. Its just not Thanksgiving without it.

If you are looking for the no fail, no baste turkey, I use a cheesecloth to wrap my turkey. This is a tried and true, tested recipe.

Thanksgiving is the ultimate comfort food day and one of the things I want to remain grateful for is the diversity of food I have been exposed to, and all the fabulous home cooks who have shaped who I am.

A traditional recipe for Pennsylvania Dutch baked corn pudding, a must for the Thanksgiving dinner in the Amish or Mennonite home.

After experimenting in 2015, I changed added a new version of the recipe using buttermilk and 3 cans corn (one I cream) instead of the original two cans of corn.

Either is good. Write me at spinachtiger@me.com if you have any questions.

There are Amazon affiliate links, which earn a small commission, but do not affect price.