I was happy because without that huge amount of beans, I thought I would actually quite like chili. Large amounts of beans are also not low FODMAP, so I couldnt do that anyway, but a small amount of beans is allowed.

Later, this dish became more and more popular and different variations were made, such as a version with beans. Here in the Netherlands, I have actually never seen a chili con carne without beans. So, adding beans to chili con carne is popular, but you dont have to.

Because many people know the version of chili with beans and also like it, I have used beans in this low FODMAP chili con carne. Of course only a small amount because beans are limited low FODMAP.

Beans contain FODMAPs from the group galactans and most kinds are therefore not low FODMAP. Luckily there are a few kinds of beans that have a low FODMAP amount, so you can enjoy them in small servings. That is great because beans are good for you and it is important to add some beans and pulses to your diet.

In the Monash app, you can find beans in three versions: sprouted, boiled and canned. I assume that with boiled they mean the dried version of the bean that you cook. I am going to tell you about the options that you have for canned beans, because thats what you will probably use in this recipe.

The following kinds of beans have a low FODMAP serving:

I choose to use black beans in this recipe.

Beans that are often used in the Netherlands, such as kidney beans and brown beans have not been tested yet. After the elimination phase, you could test a small amount of those beans to see how you react to them. Stick to 35-40 gram per serving, like the low FODMAP serving of the other kinds of beans. I used the following spices and seasonings for this chili con carne recipe:

I love adding a dollop of low FODMAP crme frache as a garnish. It is also super yummy to serve some plain tortilla chips with the chili con carne. 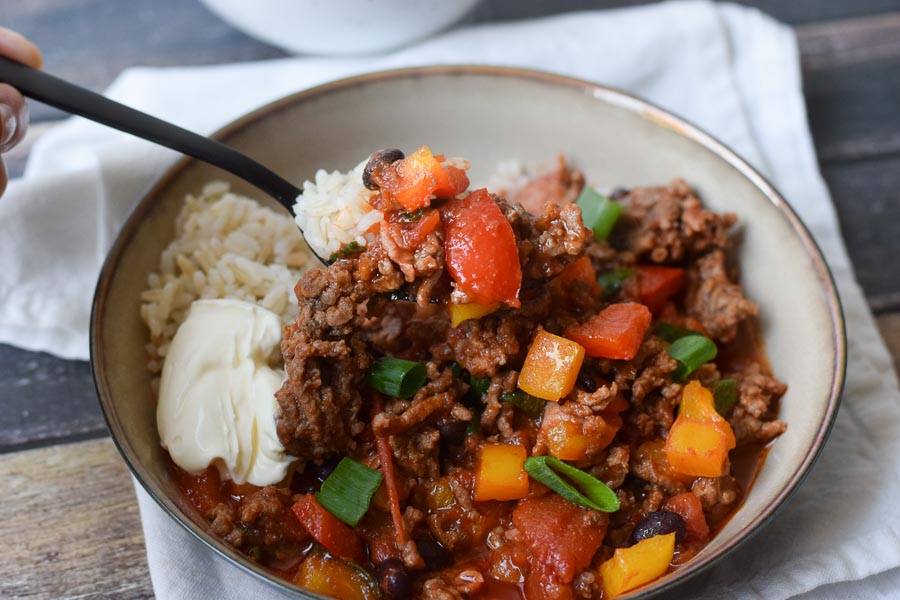 Do you rather not eat meat and want to make a low FODMAP chili sin carne? That is possible too! Leave the bacon out and replace the minced meat by a low FODMAP vegetarian option, such as Quorn mince.

A simple recipe for low FODMAP chili con carne with black beans. With option for chili sin carne and it is also possible to make it without beans. Gluten-free and lactose-free.

Not a fan of beans? You can also leave them out.