by admin November 11, 2019
As we think of our brave veterans today, I would also like to begin todays blog post by saying a heartfelt THANK YOU to those of you who have served our country. I am so grateful for your service, protection and sacrifice. Thank you, thank you.

Ever since we moved to the Charlotte area, weve had the Carolina Renaissance Festival on our radar. Permanent signs pointing the way to the large festival can be seen all year around our town though the festival only takes place from the beginning of October through the end of November. Its tucked away behind a a perimeter of large trees so we really had no idea what to expect from our first Renaissance Festival experience. 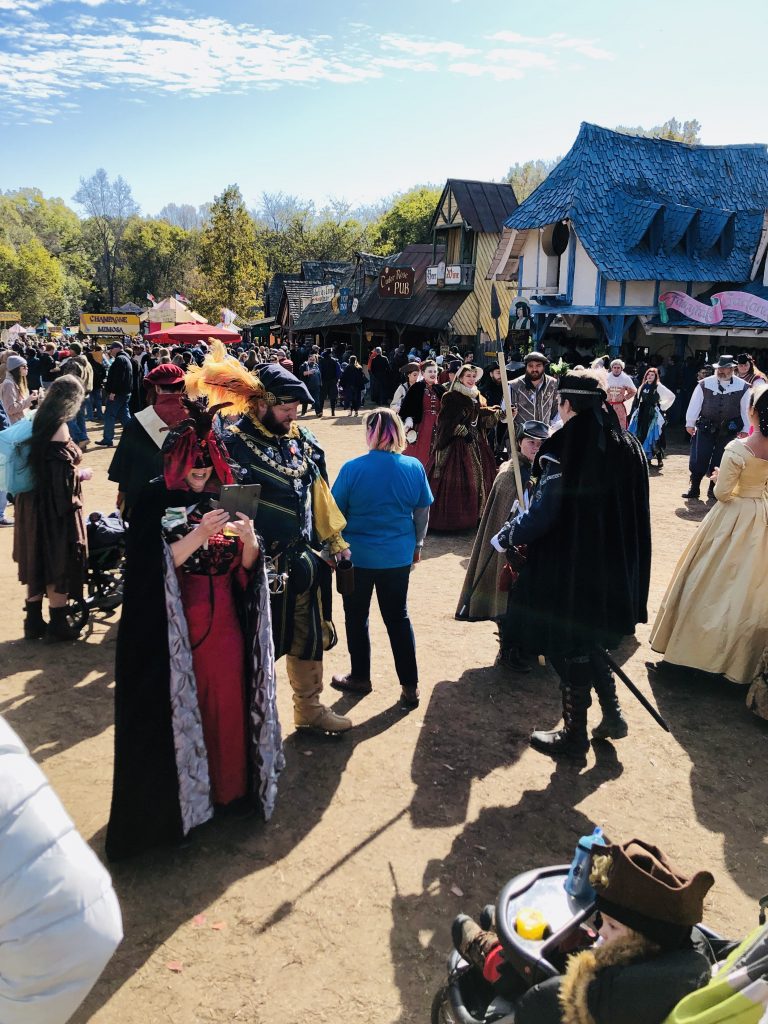 I was shocked to find what looked like a miniature village bustling with artisan shops, countless shows, a petting zoo, a jousting arena and more behind the entrance gates. Many of the people attending came dressed up in costumes ranging from pirates and dragons to knights and royalty. We saw a lot of corsets, faux-fur, cloaks and capes, flower crowns, leather boots and flowing skirts and dresses. Many of the costumes were quite intricate and beautiful.

Our family had plans to arrive at the festival soon after it opened on Saturday and that was absolutely the way to go with our crew because when we left the festival three hours later, the lines to get in were absolutely bananas and traffic stretched for miles. We clearly had NO idea just how many people the Carolina Renaissance Festival attracts every weekend and Im glad we arrived early to avoid some of the mayhem. 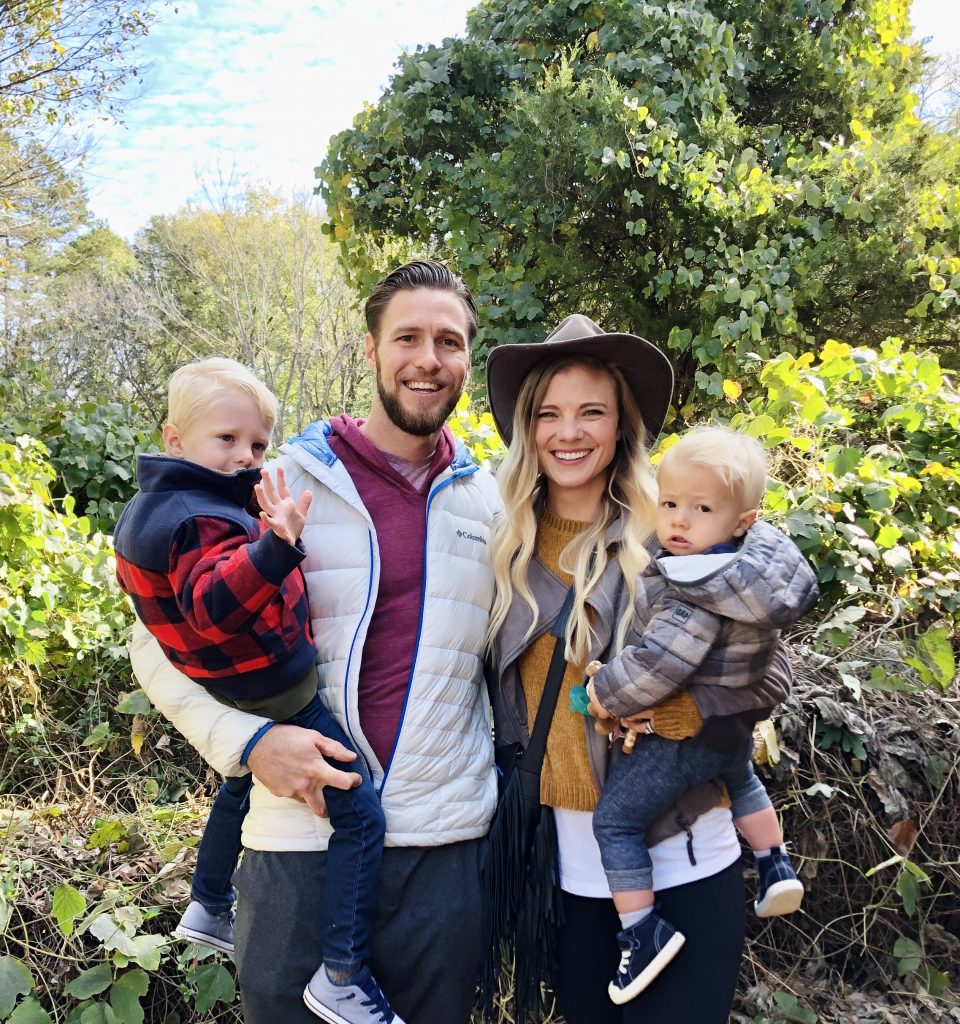 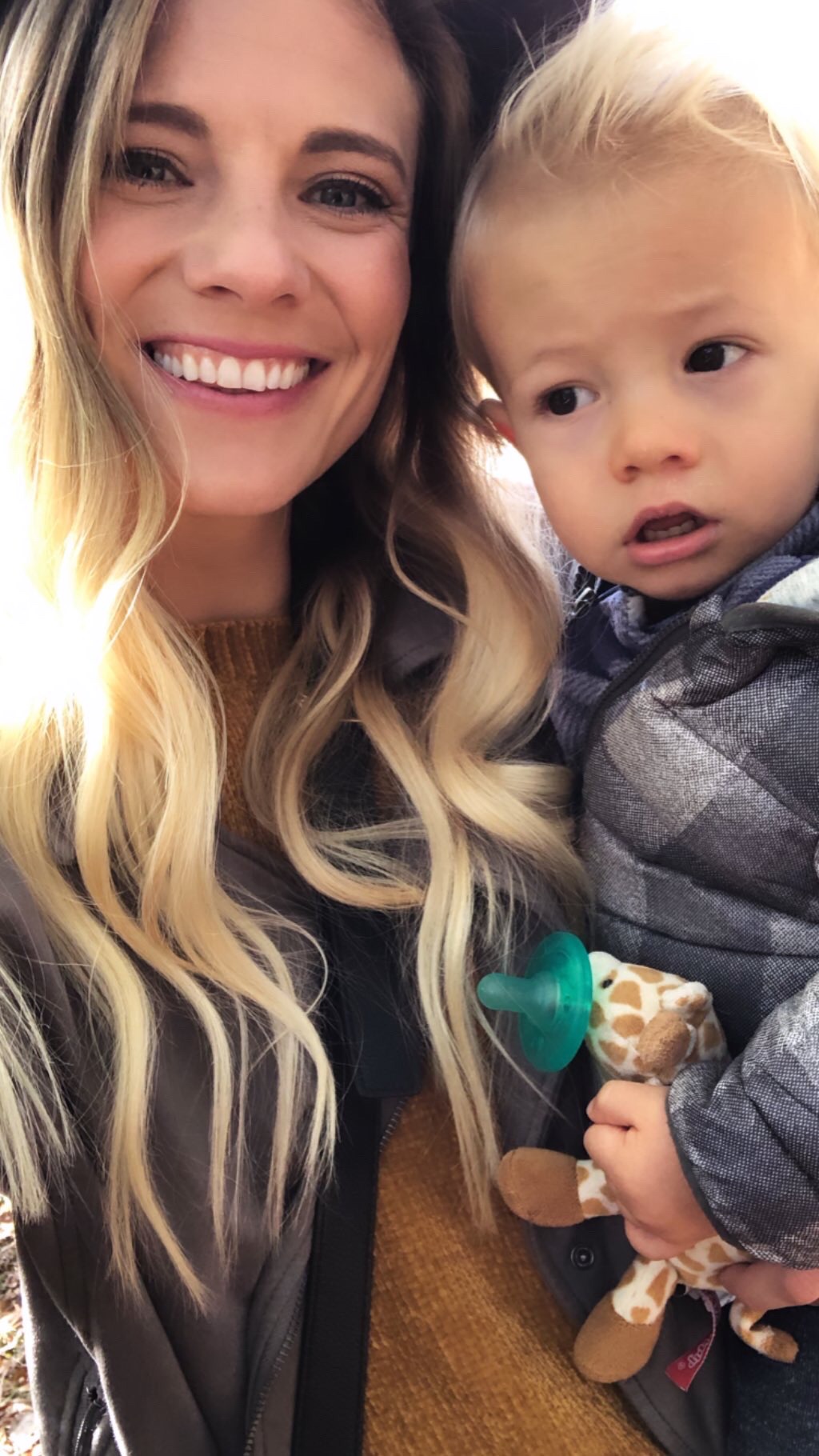 (I snapped this picture of me with Ryder right after we arrived. He was clearly blown away and very much in awe and maybe a little skeptical of the mayhem around him.)

We spent most of our time at the festival simply wandering around, stopping for various treats, festival rides, shows and more. 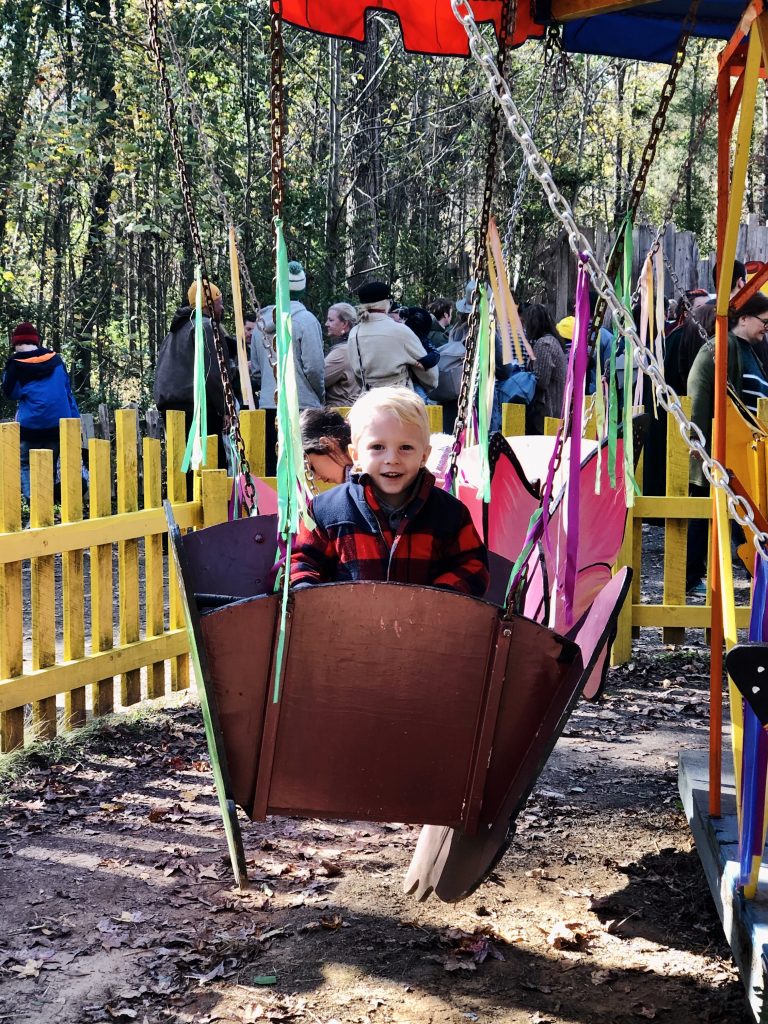 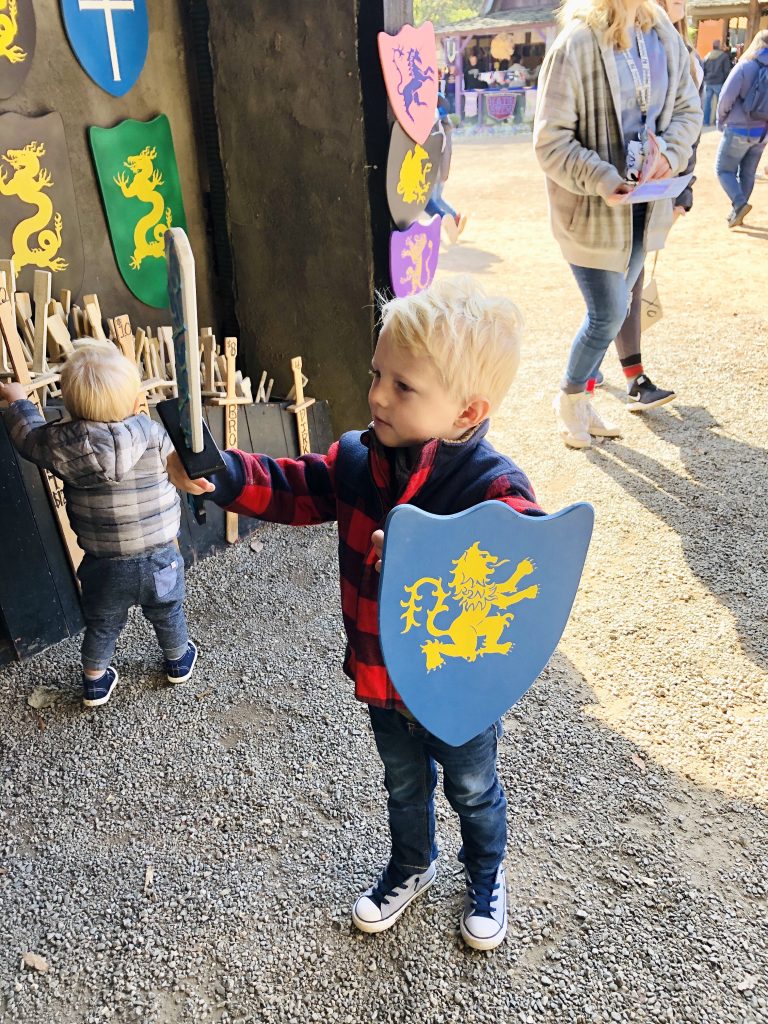 Though Ryder was too small for most of the childrens rides, Chase loved them and had a blast! After Chases excitement over our corn maze adventure earlier this fall, we jumped at the chance to go through the festivalsmini maze with him again. He was all about it, especially when it ended with him receiving a gold coin.

Ryders favorite part of the festival was the petting zoo! Our fearless child had no reservations when it came to feeding large (and rather aggressive) animals. He just laughed when they snorted and stomped their feet and our animal-loving dude was in heaven. 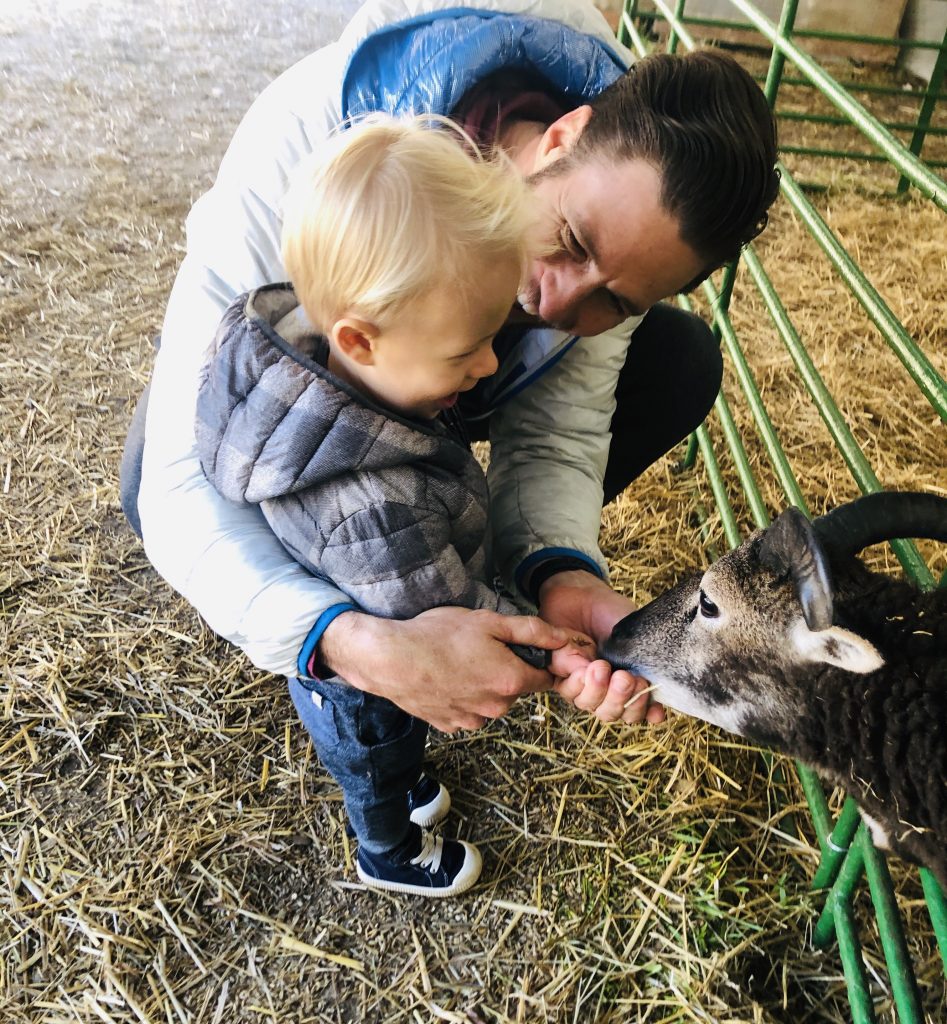 Taking second prize for Ryders festival favorite was the food! He shocked us by going to town on the turkey leg we bought and every time wed ask him if he wanted more, hed coming sprinting over to the turkey leg, mouth open wide with the biggest smile on his face. 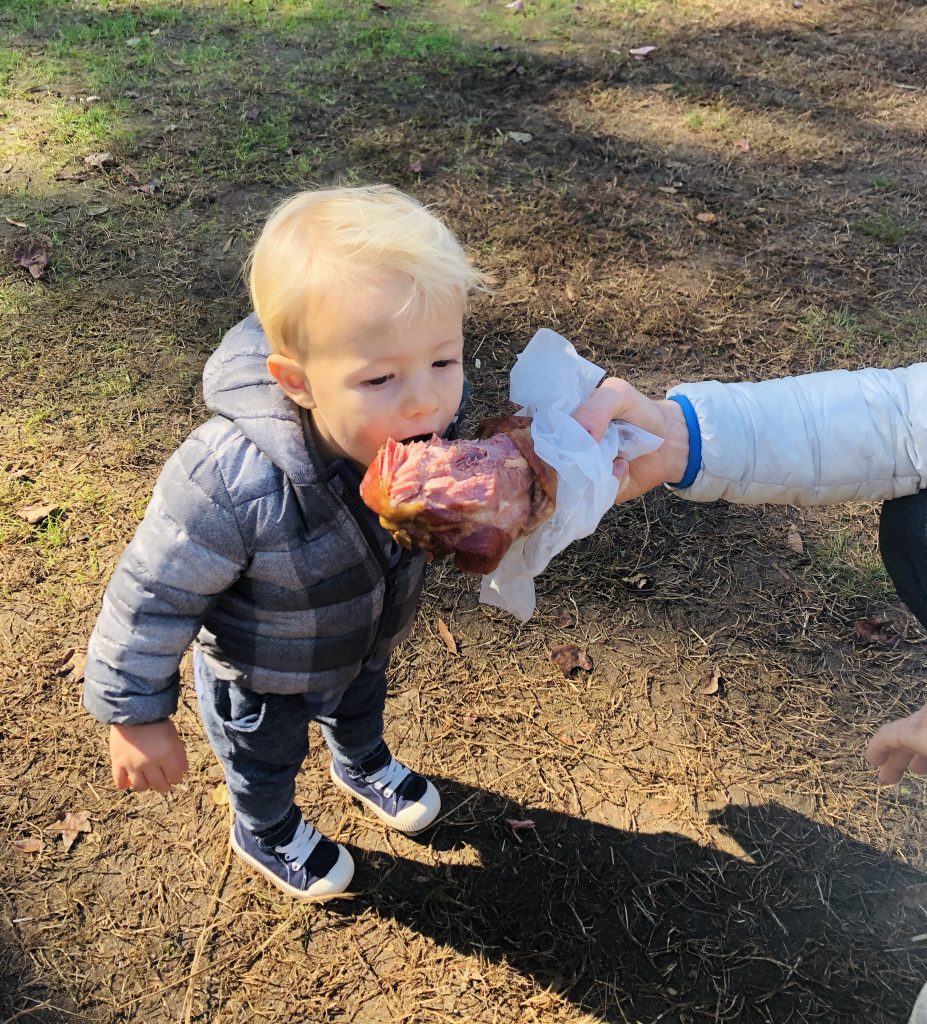 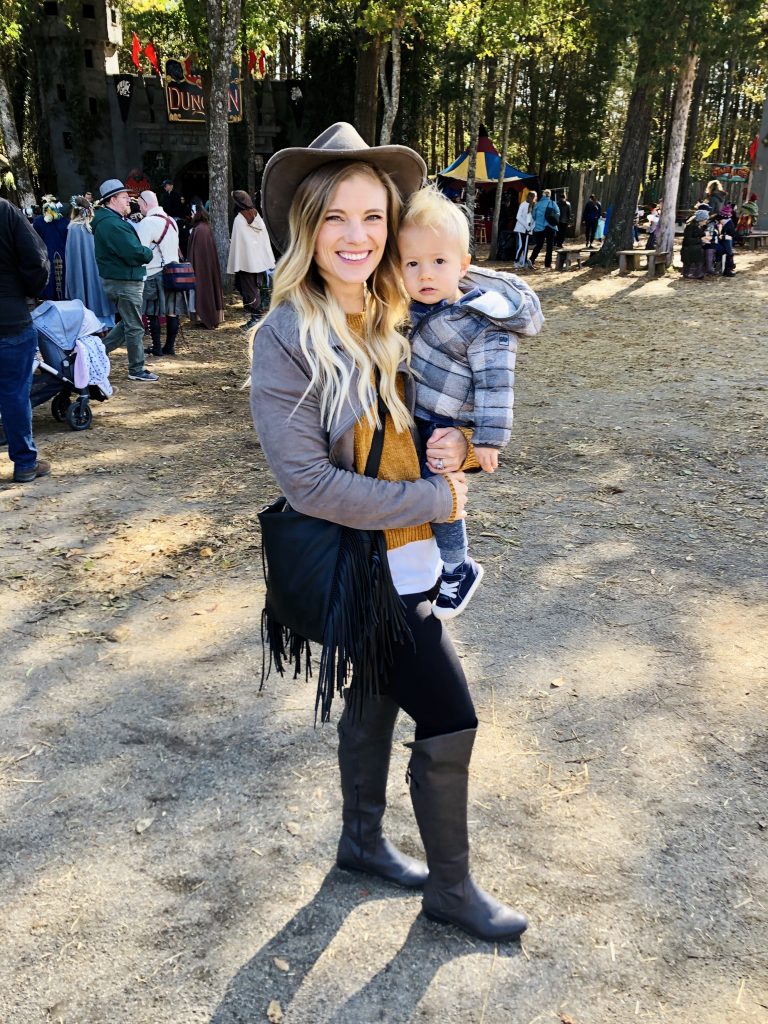 The other big hit of the day for our crew was the jousting show that took place on the tournament field. 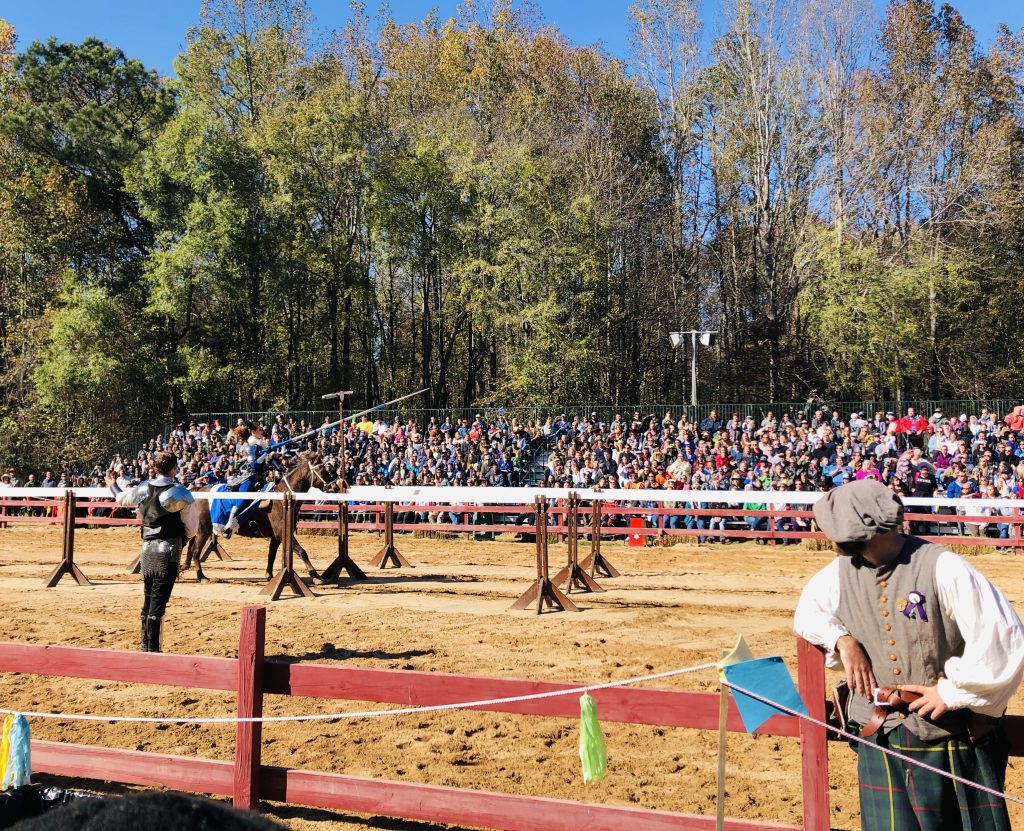 Two knights in full armor competed to the sounds of a cheering and jeering crowd and it was impossible not to get caught up in the energy of the show.

We left about an hour after the first jousting show and Ryder was asleep in the car within 2.5 seconds! We kept the rest of our Saturday very low key and hung out around the house with our crew. Saturday night looked like homemade pizza and a movie!

Sunday felt like a very full day but we didnt do anything too crazy. We kicked off the day with a return to the siblings class at MyGym. 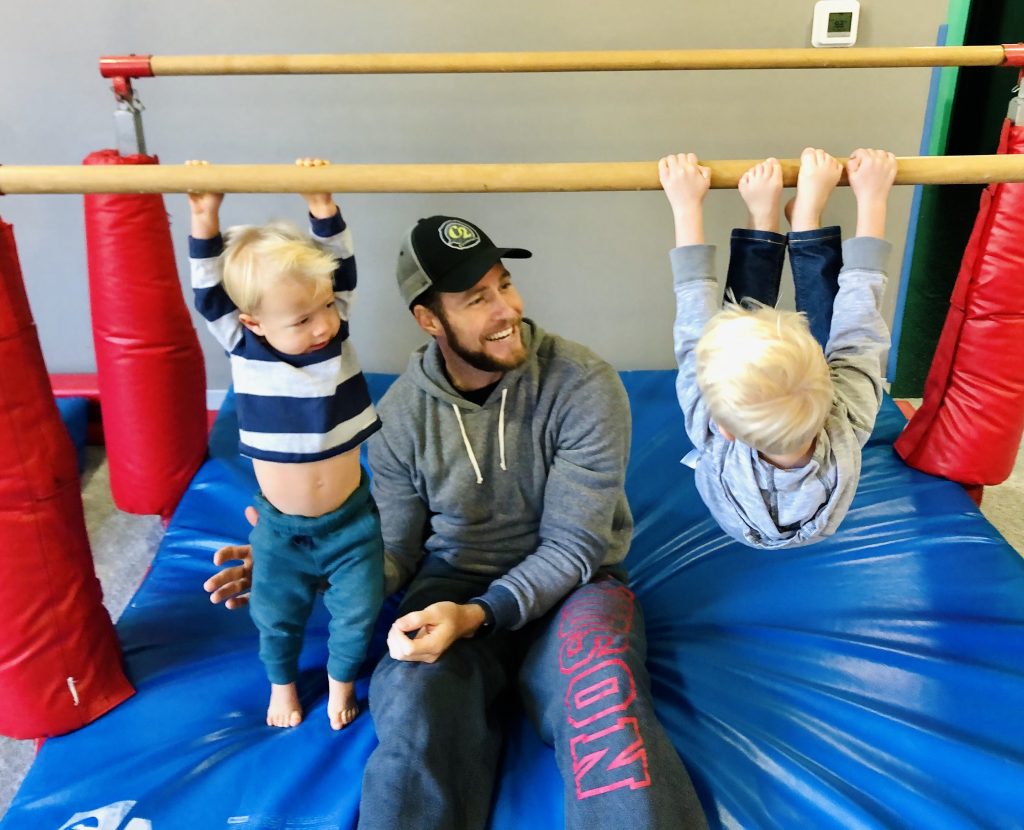 Theres not much our boys love more than mornings at MyGym and Ryan and I always love playing with them on the various equipment and watching them just run around and be kids. Once the class was over, we spent the rest of our morning running errands. We popped into Lowes and swung by Marshalls where the boys picked out gifts to include along with a donation in theOperation Christmas Child shoe box we picked up through Samaritans Purse at Burn Boot Camp. 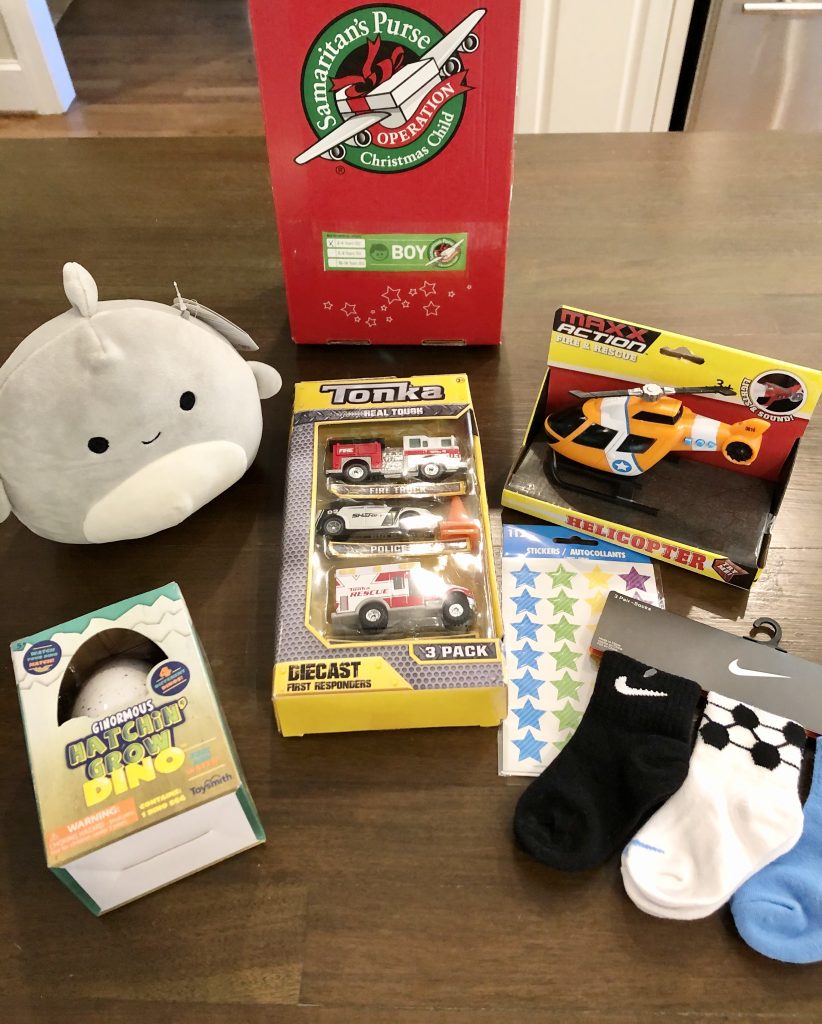 And no, unfortunately everything we picked up could not fit into the shoe box, so Im trying to figure out if its okay to over pack a shoe box and how all of that works since our shoe box isnt due until next week. Id also like to include some more items in our box like a toothbrush and school supplies, so we will see what they say!

Ryder went down for a nap soon after we arrived home and then Ryan, Chase, Sadie and I spent most of the afternoon outside putting up Christmas lights. 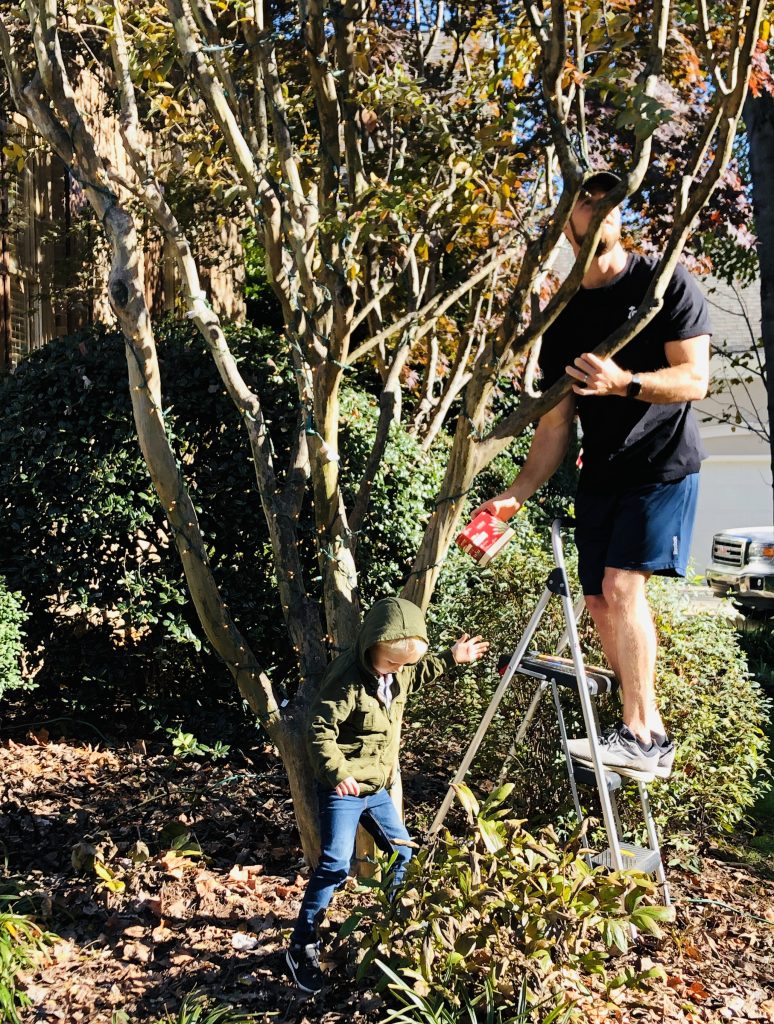 It was absolutely gorgeous outside on Sunday 60s and sunny and we figured we should take full advantage of the warm fall weather and put up our lights before temperatures get too chilly.

Once Ryder was awake, we figured a little more time outside wouldnt hurt and made our way to a local park where the boys could run around for a bit before dinner and bed time. 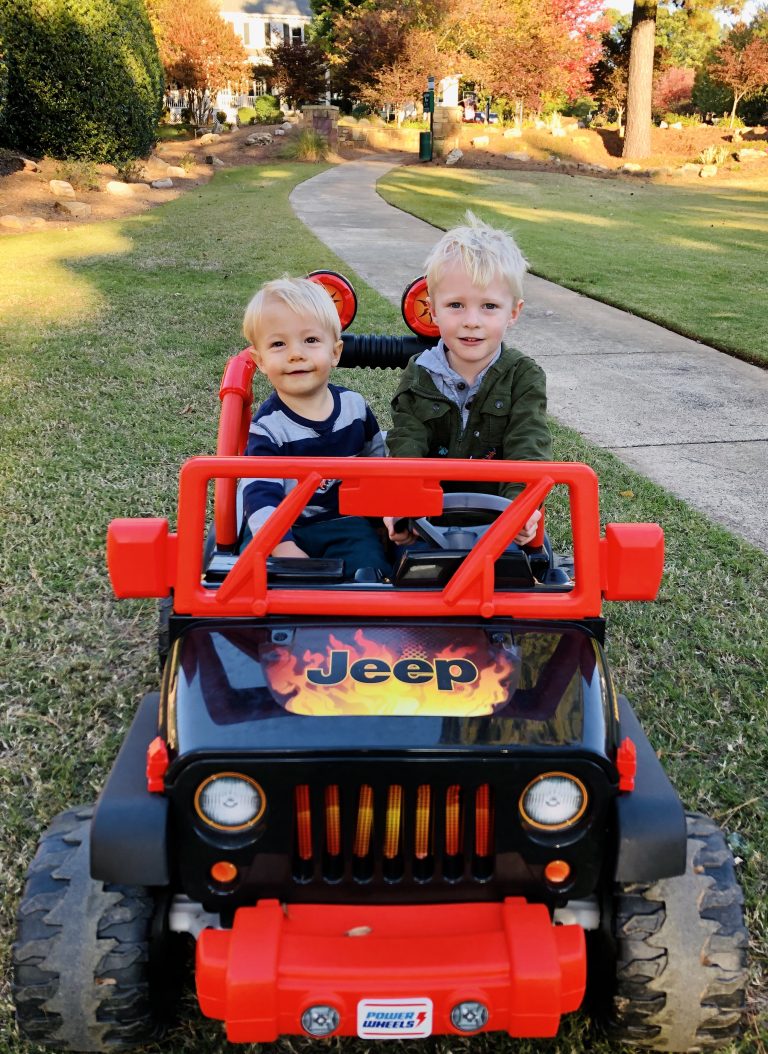 We had both boys in bed before 7:30 p.m. which was fabulous! Ryan and I were both rather exhausted and crawled into bed soon after the boys to read a bit before falling asleep. After looking for a non-fiction book to read, I settled on Upstairs at the White House: My Life with the First Ladies and while it was a little slow to start, its picking up steam now and Im enjoying it.

As for the week ahead, we dont have anything crazy on the agenda and it should be a pretty usual week around here. I hope to share a day-in-the-life recap with you guys at some point as well as a new fall-friendly recipe. I hope you all have a good Monday!